8 Amazing Castles To Visit Near Worcestershire 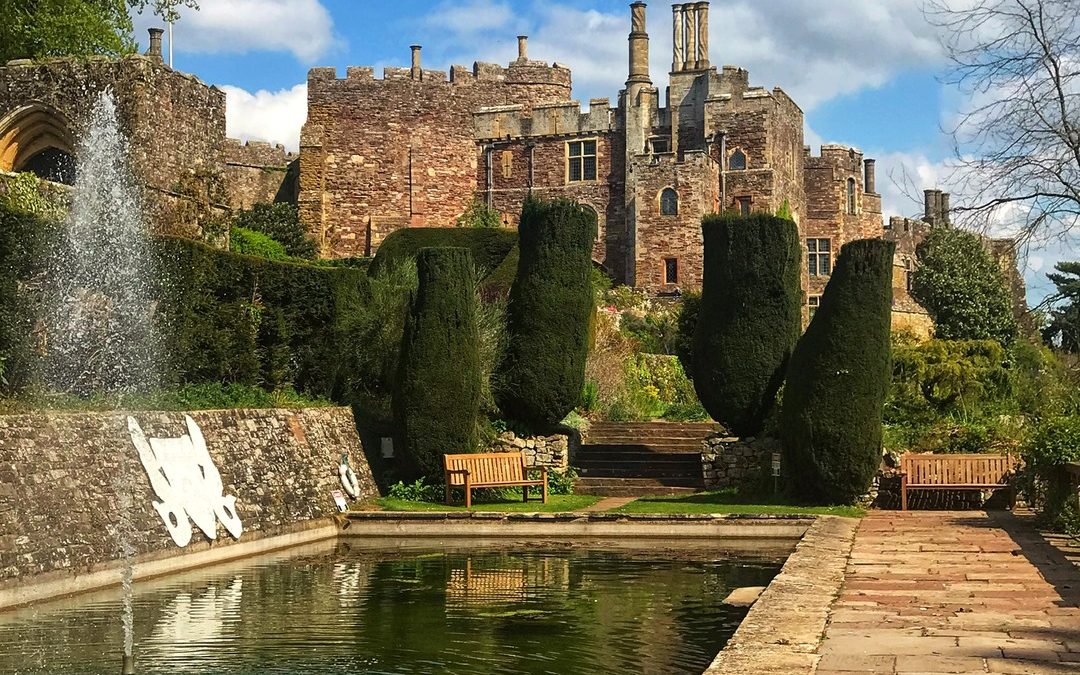 The county of Worcestershire is blessed with many magnificent castles within a 30 to 60 minute drive away depending on where you are in the county.

Worcestershire is home to Hartlebury Castle (which is also called The Bishop’s Palace). The rest of the castles in the article are in the surrounding counties.

The castles are some of the finest and most beautiful in the UK. Many castles host amazing events and activities throughout the year so are well worth a visit.

Take a step back in time and marvel at the splendid castles that are on the Worcestershire’s doorstep. 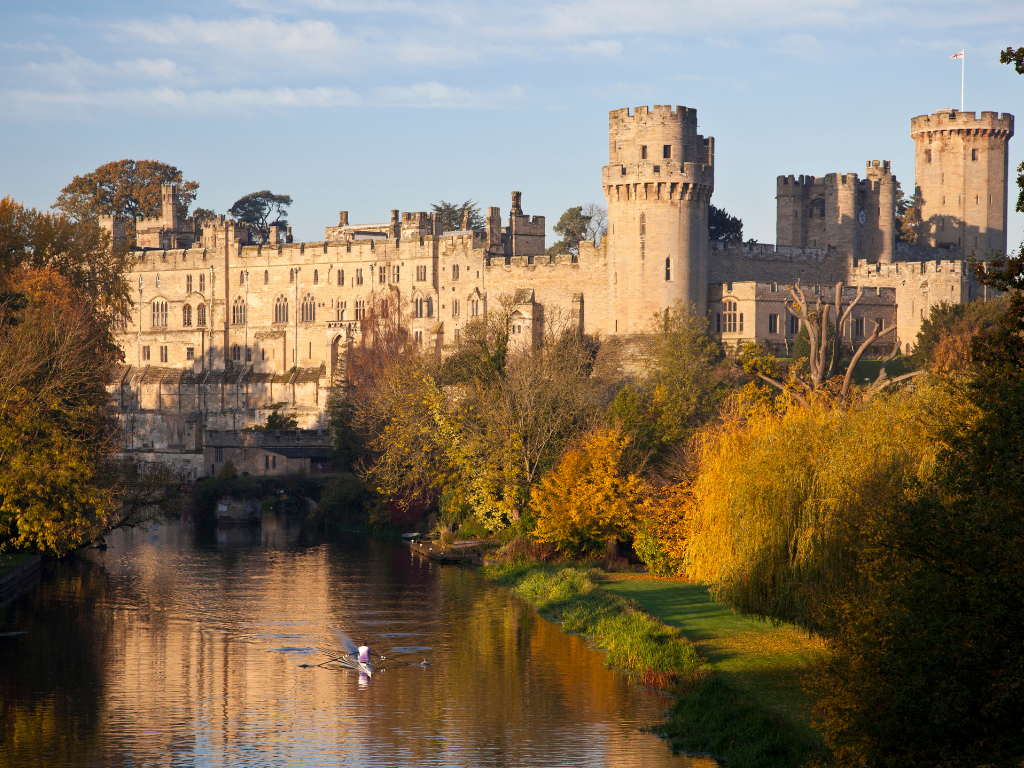 Warwick Castle is the most commercial of the castles featured in the article, having been taken over by the Merlin Entertainments Group (who own Madame Tussauds, Alton Towers and other theme parks).

Visit the Great Hall which is the castle’s largest room, having been created in the 14th century, renovated in the 17th century, and repaired in 1871 after a fire.  See the State Dining Room where Queen Victoria and Prince Albert dined. Marvel at the towers some of which are supposedly haunted!

Some of the amazing attractions inside the castle include the Horrible Histories Maze, the dungeons, the Princess Towers and playground.

There are often shows in the Castle grounds including birds of prey and jousting. You can also partake in archery (for an extra cost).

There’s so much see and do in a wonderful backdrop of the castle and it’s beautiful grounds. It’s well worth a visit.

Find out more at Warwick Castle 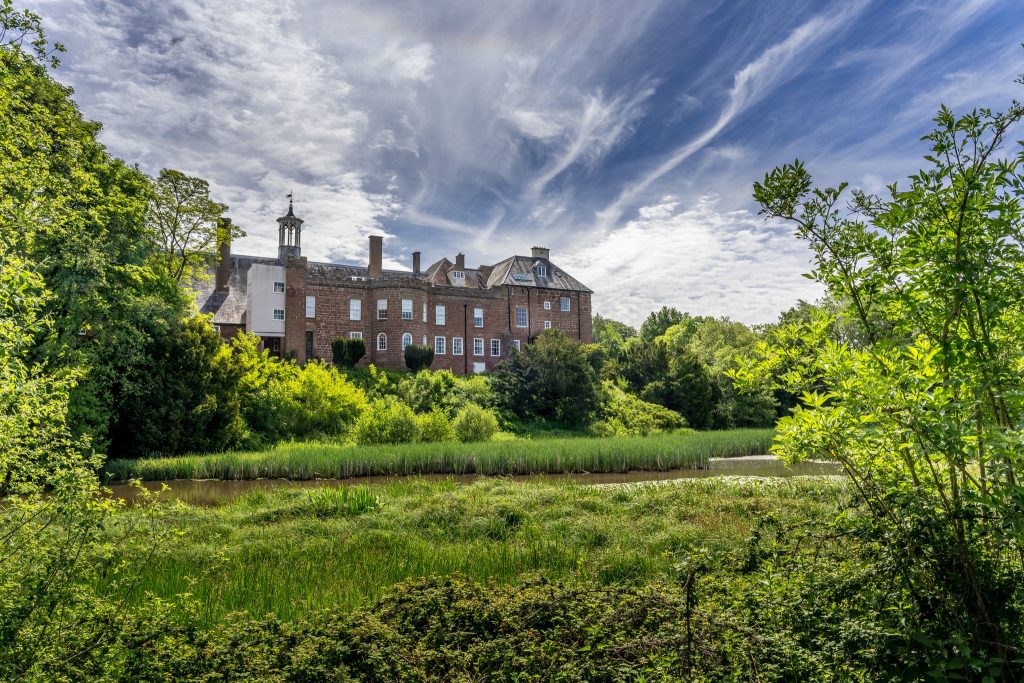 From 855 to 2007, Hartlebury Castle was the residence of the Bishops of Worcester. The Bishop’s stories are fascinating. Three of the bishops were made saints, two were burned at the stake for their religion, one became the Pope who denied Henry VIII’s divorce, and another witnessed Mary Queen of Scots’ execution.

Inside the castle, the majestic chambers, the Medieval Great Hall, and the Georgian Saloon are all worth seeing.

Although it bears the name castle, it doesn’t have the traditional look of a castle. In 1268 Bishop Giffard was given authority to fortify the site and it was granted the name of castle. The fortifications remained in place for nearly 400 years, until they were destroyed in 1648 at the close of the Civil War. When Bishop Fleetwood repaired the Castle in 1675, there was no need for a defended castle, so a lovely country residence was built instead.

Hartlebury Castle is also home to a museum with fascinating collections including toys, period costumes, and the magnificent transport exhibit where you can see a Victorian fire engine, a Penny Farthing, and a vast collection of artistically adorned Gypsy caravans.

Kids will love the schoolroom and scullery allowing them to step back in time to the Victorian era.

During school holidays there are often have themed events for family and kids.

Find out more at Hartlebury Castle. 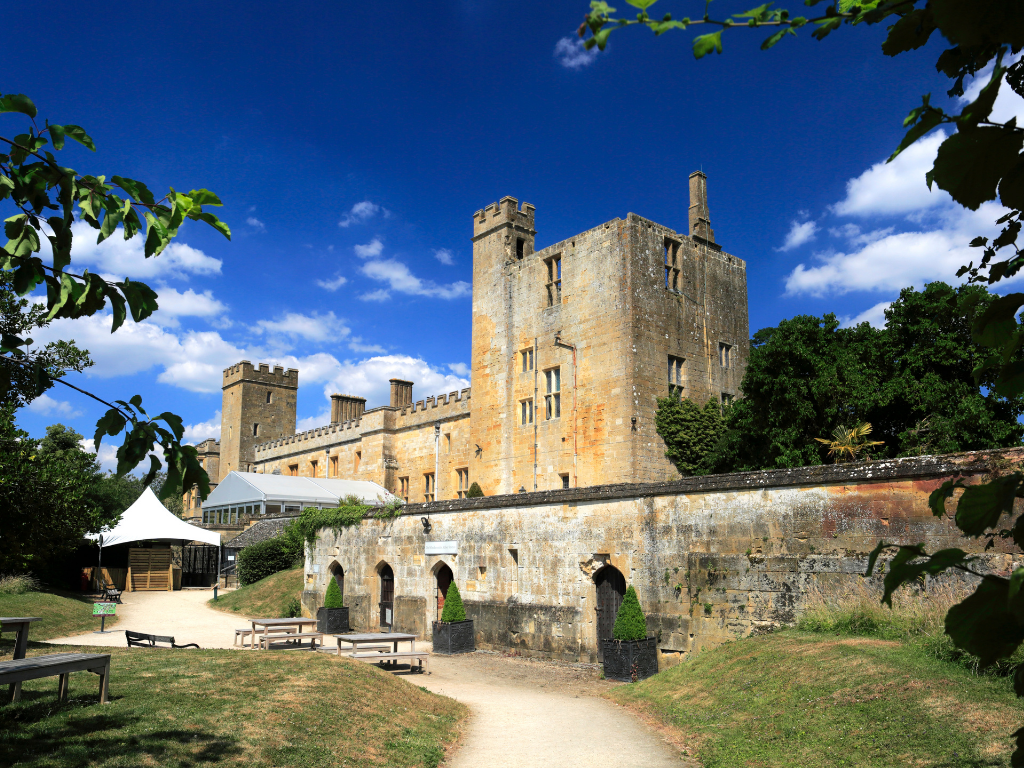 Sudeley Castle & Gardens has played an essential role in England’s history for over 1,000 years.

The castle halls and exhibitions feature many fascinating items dating from ancient Roman times to the present day.

The castle is encircled on all sides by a magnificent 1,200-acre estate with ten award-winning gardens. The Queens Garden is the centrepiece, named after four of England’s queens who strolled on the original Tudor Parterre: Anne Boleyn, Katherine Parr, Lady Jane Grey, and Elizabeth I.

The Pheasantry at Sudeley holds a collection of 16 rare and endangered bird species from around the world.

Impressively, Sudeley is the only private castle in England in which a queen is buried – Katherine Parr, Henry VIII’s sixth and final wife. You can tour the lovely 15th century church where she now lies.

There’s a range of exciting events for the family held during the year. At the adventure playground, kids can enjoy ascending the wooden fort and zipping down the zip line, as well as conquering the brand new 10-piece assault course. 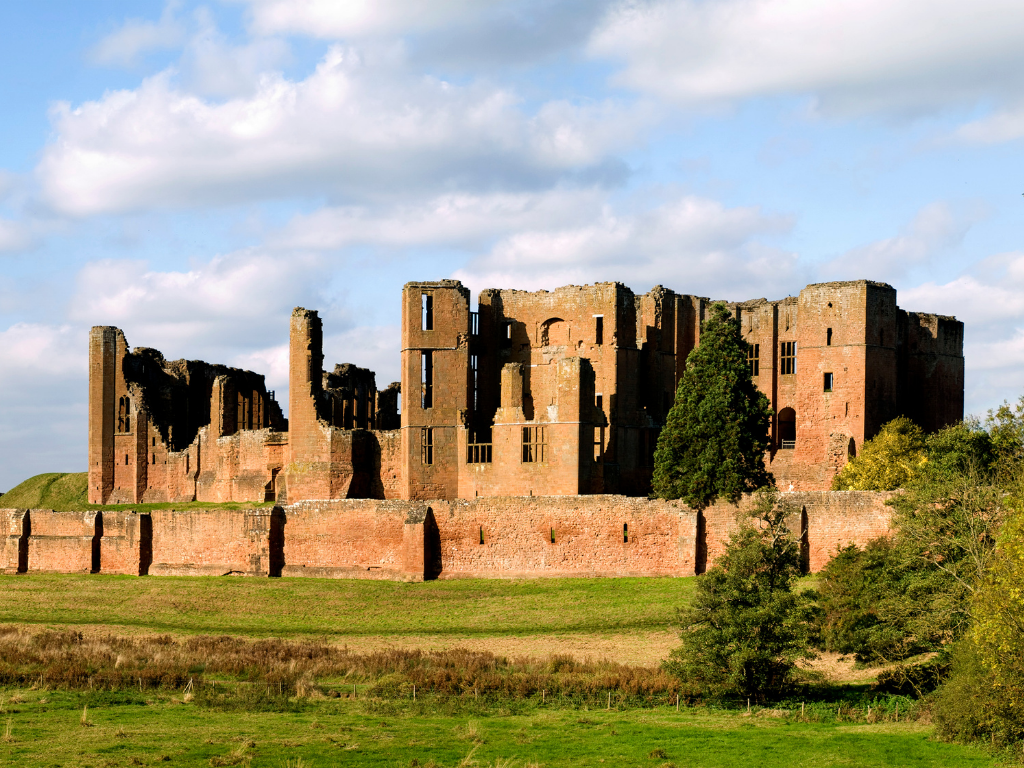 Kenilworth Castle are the ruins of a massive medieval fortress that survived a famous siege and later became an Elizabethan palace.

As you marvel at the enormous medieval keep, climb the towers to see the amazing views, and envision the majesty of the Great Hall, you will be immersed in 900 years of history.

You may also follow along Queen Elizabeth 1’s footsteps by seeing Leicester’s Building, which was built expressly for her visits, and discovering the accurately restored Elizabethan garden.

The Stables Cafe is a great place to enjoy refreshments during your visit. 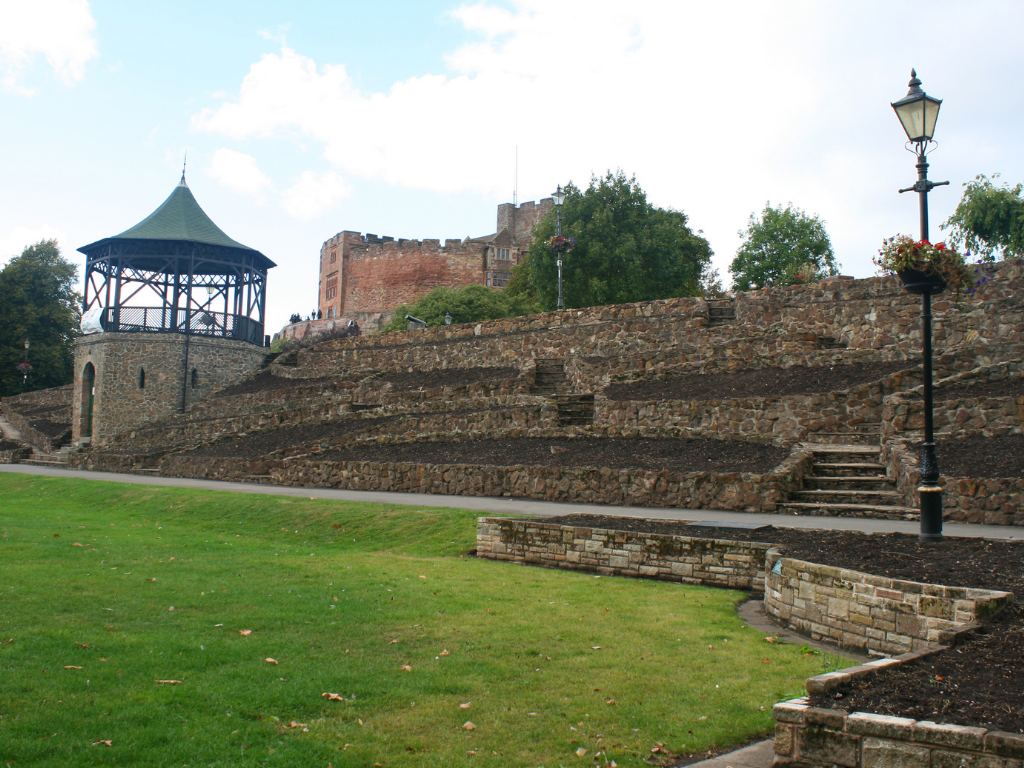 Tamworth Castle is a Grade I castle, was built in the 1180s and has excellent views of the Rivers Tame and Anker.

For families and kids, it’s a great place to take a trip back in time and create some wonderful memories! Kids can try on armour, dress in medieval garb, wield a sword, and learn about Saxon fighting strategies. Enjoy family events like magical storytelling, expeditions around the Castle, and hands-on activities.

King Henrys I, II, and III, as well as Sir Walter Scott, would have been among the notable guests (1828),

If you’re interested in the supernatural, The Lady’s Chamber is believed to be haunted by the Black Nun, also known as St Editha, who founded the Benedictine Abbey at Polesworth. 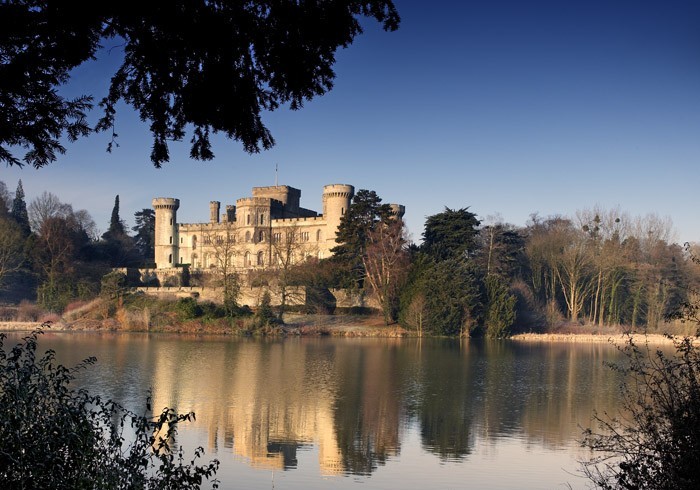 Eastnor Castle is located in Herefordshire, on the border of the Cotswolds, at the foot of the Malvern Hills.

Eastnor Castle is the home of the Hervey-Bathurst family, and it is surrounded by a beautiful deer park, arboretum, and lake. The castle is a 19th Century revival castle built by the 2nd Baron (Lord) Somers, later 1st Earl, between 1810 and 1824.

There’s lots to do here for people of all ages especially kids. Kids will love the adventure play area, treetop walkway and maze. Find out about the some of the fun kid’s activities here.

There are all kinds of events that take place here throughout the year. One of the best time to visit is during the Chilli festival. If you’re game, enter a competition to see if you can beat others by eating the hottest chili. Kids will love the adventure play area and maze. Other events include Easter treasure hunts and a vintage steam fair. 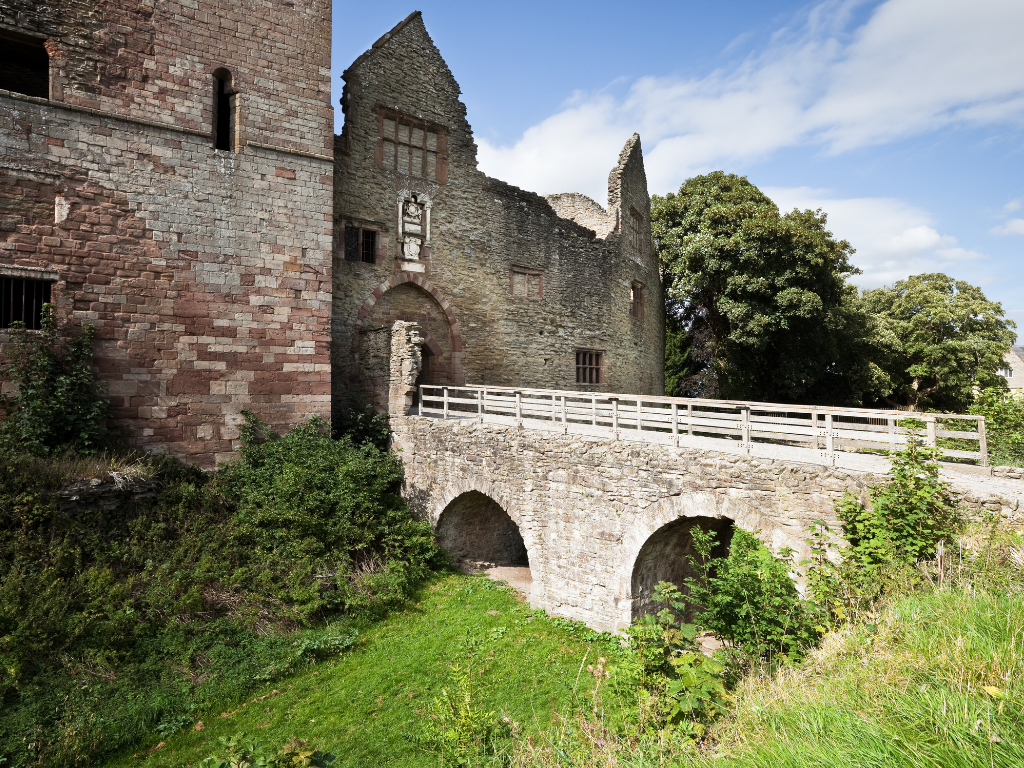 The beautiful medieval remains of Ludlow Castle are set in the midst of the wonderful, market town of Ludlow, in the glorious Shropshire countryside. Even though it’s a ruin, the buildings are remarkably intact and there’s lots of spaces to explore and towers to climb.

Additionally the views across the countryside are stunning.

As well as strolling through the medieval grounds, there are events that take place at the castle throughout the year, so it’s worth checking the website to see what’s on. 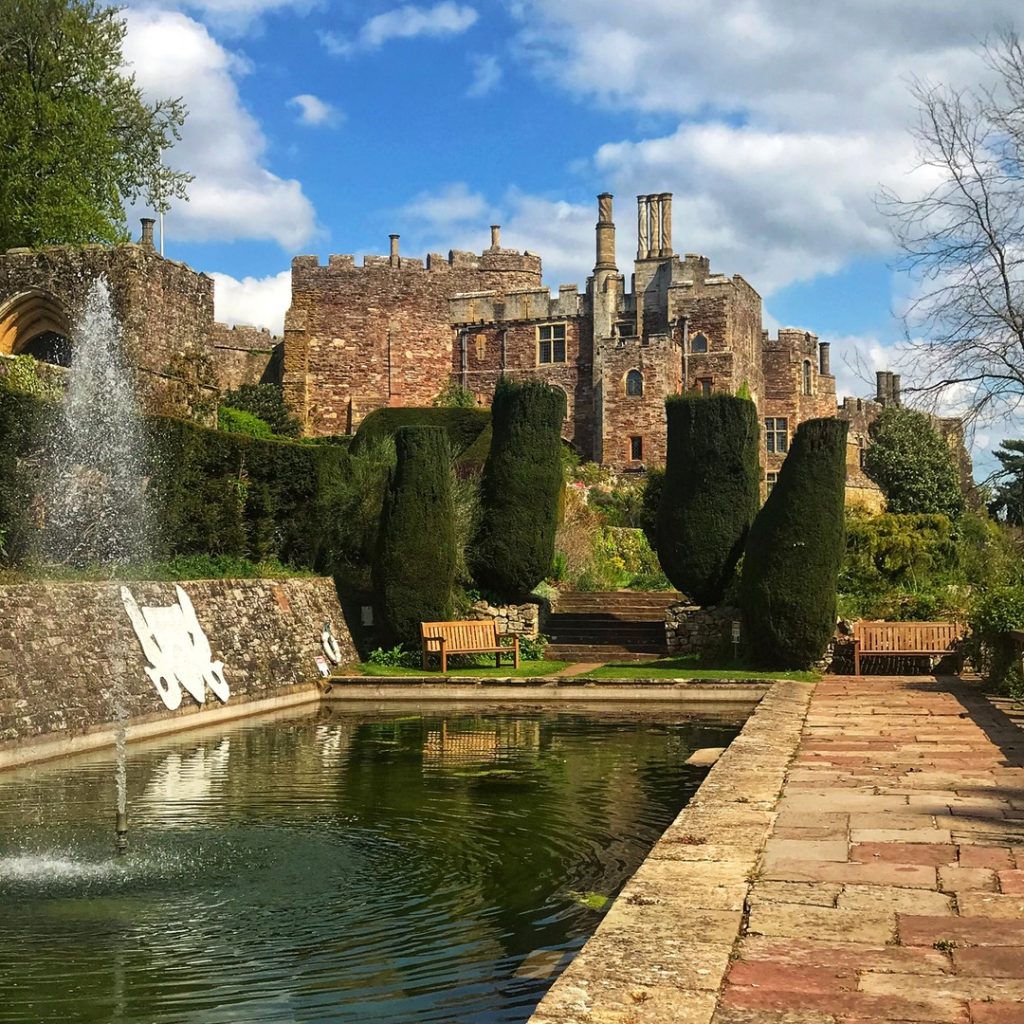 Berkeley Castle has been the home of the Berkeley family since the late 12th century, when grandfather Robert Fitzharding finished the keep.

Like most castles, the history is fascinating. See the King’s Gallery, with the cell and dungeon where King Edward II was imprisoned and murdered. Visit the medieval larders, buttery and kitchen, The Great Hall and Armoury and the Grand staircase.

It’s a fantastic place to visit with lots going on during the spring and summer months. Events include a civil war re-enactment, a classic car rally, outdoor cinema, Tudor days and lots more.

Pin Me For Later! 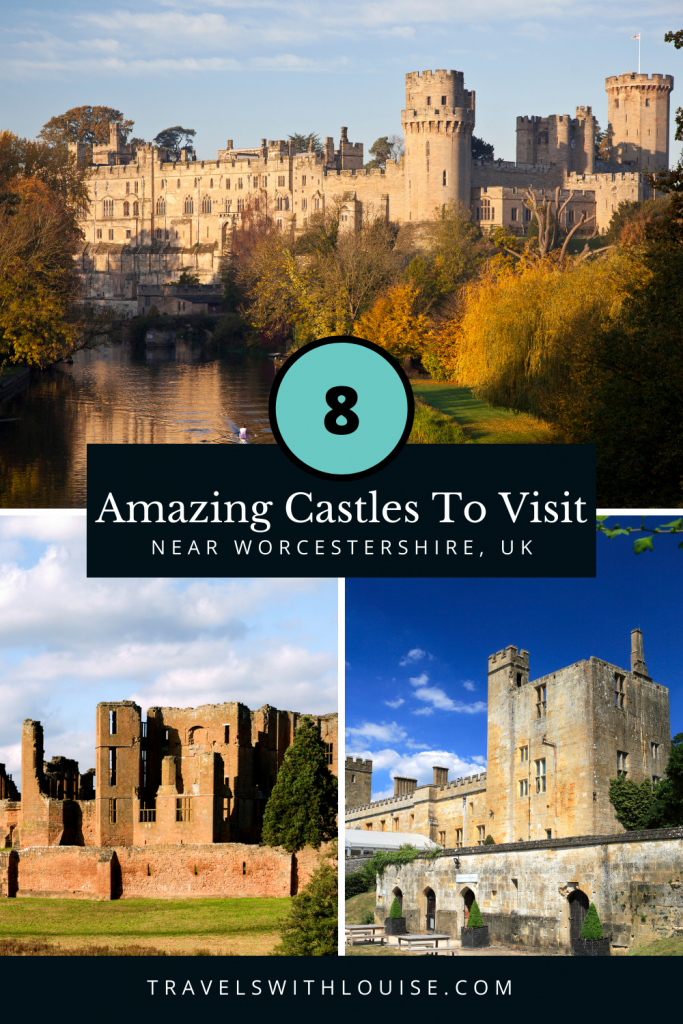 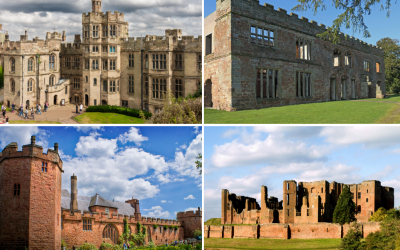 8 Amazing Castles In and Around Warwickshire

Warwickshire is lucky to have some amazing castles and castle ruins. Perhaps the best castle (not just in the county of Warwickshire but in the whole of the UK) is Warwick Castle. It’s a stunning castle with fabulous views and beautiful grounds. There are... 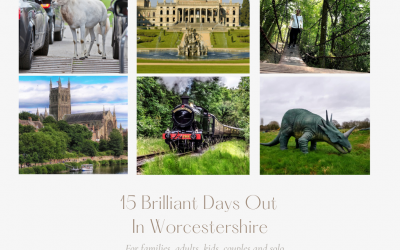 15 Brilliant Days Out In Worcestershire

Worcestershire has some amazing days out for everybody! Popular family days out include include stately homes, the safari park, steam train rides, a wide range of museums, parks with fun fair and lots more. For adults, Worcestershire is also home to some... 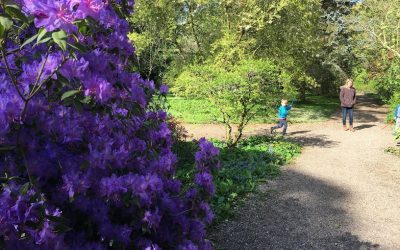 10 Beautiful Gardens To Visit in Worcestershire